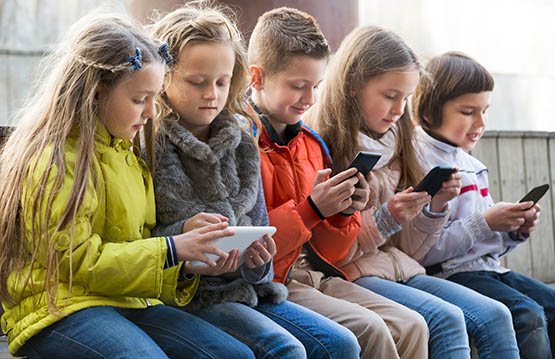 What Age Should a Child Get a Mobile Phone?

Many people recommend that kids should at least be 12 or 13 years old (high school age) before they get mobile phones of their own. That’s because the child’s early years should be dedicated to real-world learning and interaction as well as face-to-face communication.

Up to over 1 million new neural connections are formed every second during the child’s early years. This is the time when the child’s brain architecture and the foundations for later learning and development are being built. As a result, the child’s early years are crucial for his or her later successes and happiness. This period is then best focused on interacting with real people and physical environment.

The dangers of modern age

Mobile phones and internet allow for easier and faster connectivity. It also provides a high level of convenience because we can now easily access information, products and services. But this comes with a high cost. We now have less time for real-world interaction. Every hour we spend on our mobile devices is one hour taken from communicating to people and exploring the world.

This is especially the case with young children who are just starting with their learning and exploration. They’re starting from almost a blank slate. The first things to be put on that blank slate will be crucial to the children’s later development. That’s why us parents we have to be careful of what to put there. Also, kids don’t yet have “filters” yet. They might accept and absorb all information they see as true. This can be detrimental to their learning.

Moreover, kids might be learning from wrong or inaccurate sources. They won’t be able to discern truth from lots of misleading information available in the web. Many websites now are targeted towards children (young and evolving market) which make kids even more vulnerable to misinformation or inaccurate representation of reality.

Giving kids mobile phones can be justified by saying it’s for their safety. They can text or call whenever something’s wrong. However, this might not be the best or only approach to guarantee their safety.

For instance, most modern environments now are considered safe. If you think that giving your child a mobile phone will guarantee your peace of mind, there might be something wrong in the environment in the first place. Consider moving to a new location (your home, the early learning centre) or driving to other routes to make you and your child feel safer.

In cases where it’s an absolute necessity for your child to have a phone, limit his or her usage of it. Mostly it should be for connectivity and contact, not for play and learning. Extended hours of mobile phone usage lead to physical inactivity. Also, we humans (especially kids) learn best by interacting with 3D objects and the physical environment and communicating face-to-face with other people.

What age should a child get a mobile phone? Think about the consequences and the impact of a mobile phone to your child. The focus should always be on real-world learning especially during the child’s early years. Whether at home or early learning centre, kids should touch and interact with physical objects and environment instead of what a phone screen projects.

Here at Star Academy Kids Early Learning Centre, we encourage active play, exploration and investigation for kids. We provide open-ended and child-directed programs so kids will explore possibilities and make further sense of the world. Enquire now if you want to learn more about our warm and friendly approach.